Kelly Gelinne, our Associate Director of Marketing, sat down with Jessie Zhou, Ph.D., Nuventra’s former Director of Pharmacometrics, to learn more about her predicted changes in drug development, her advice for a brand new pharmacometrician, and her favorite project she worked on at Nuventra. Listen to Kelly’s interview with Jessie above or read the transcript below.

Jessie received her Ph.D. in Experimental Clinical Pharmacology from the University of Minnesota Twin Cities. Before that, she received her Master of Science in Biomedical Engineering in Shanghai, China.

What advice would you give a brand new or aspiring pharmacometrician?

Jessie: I can try to share my learning curve. I think as a pharmacometrician, we should focus not only on the technical modeling skills, but also learn to provide meaningful interpretations to the other people. I feel that it is very easy for new modelers to feel so accomplished for working on complicated models and forget about its applications and what they mean to the audience.

What major changes do you predict will occur in drug development in the next 10-20 years?

Jessie: The biggest change, which is also happening now, is the type of therapeutic drugs. Small molecules used to be in the mainstream in the past, then peptides, proteins, and gene therapies came up and there have been some very successful cases. Most recently, cell therapies like CAR-T have changed our way of thinking. They also revolutionized the drug development process, where now the ultimate therapy is personalized medicine.

The second biggest change will be in the capability of modeling and simulation to support more projects during early stage, target identification stage, in vitro or in vivo stage, with the newly developed quantitative system pharmacology (QSP), physiological based pharmacokinetic modeling (PBPK), machine learning approaches, and meta-data investigation approaches.

I feel that there are two aspects: one in the therapeutic area and the other is for the methods we’re using to support the different drug development processes.

Is there a certain therapeutic area that you feel most passionate about working on?

Jessie: I’m very passionate about the oncology area, especially the newly emerged monoclonal antibodies which have been established as one of the most successful therapeutic strategies for the past 20 years. However, the unique properties of monoclonal antibodies remain as a challenge to their drug development as they are proteins and have an entirely different set of PK properties, such as absorption, distribution, metabolism and elimination (ADME). Most of the time, they do not have linear PK and the translation from animals to human is also difficult and there could be immunogenicity issues and so on and so forth.

I’ve been involved in some projects using the modeling and simulation approaches to help solve problems. For example, minimum anticipated biological effect level, or the so-called MABEL approach, to help determine the first in human dose, or the targeted mediated drug disposition or TMDD related PK models to interpret and predict the PK. I see this area with increasing challenges and opportunities for modeling and simulation approaches.

You’re originally from China. How does the approach to drug development differ between the US and China and what are the similarities?

Jessie: I think the general approach for drug development is similar for US and China, with China focusing on making generic drugs in the past, but they are now also increasing efforts right now in making new therapies. One interesting difference is probably in the traditional Chinese medicine industry. There is a cultural background that Chinese ancestors used the animals or plants to prescribe medications for the past several thousand years. As of now, these are still a critical part of prescribed medications for the Chinese citizens without well-controlled study results. This can be something that China can continue to work on to adopt the experiences in the U.S.

What is your favorite project you’ve worked on during your time at Nuventra?

Jessie: It is a project that I was involved in to support its applications all over the world. The drug itself is atypical—an oligonucleotide used in a rare disease condition. Modeling and simulation approaches were used to support the drug application. The popPK model was not complicated at all, but these were the first few models that people used to gain understanding about this type of unique molecules.

The part that I feel so accomplished and fascinated about is the acceptability of the regulatory agencies for modeling and simulation. We were able to justify the doses, waive certain clinical trials, and clarify the influencing covariates just based on the modeling and simulation results. Apparently, the Japanese PMDA has more questions than the other agencies, but I could see that they are universally supportive of a modeling and simulation approach. Ultimately, it was approved and I feel very proud of the Nuventra team in supporting the client during this process.

Kelly: Alright, let’s throw in one more bonus question for fun; to get to know you. What kind of things do you do in your free time?

Jessie: I have two kids—a 7-year-old and a 2-year old—that would indicate that I do not have much free time at all, but actually, I’ve always wanted to be a writer. I wrote novels in my free time, but my only reader is my husband as of now. Hopefully in the future I could have more readers!

Kelly: That’s great. Thank you so much for your insights today, Jessie. If you have a specific question for Jessie or another senior consultant, please don’t hesitate to contact us. 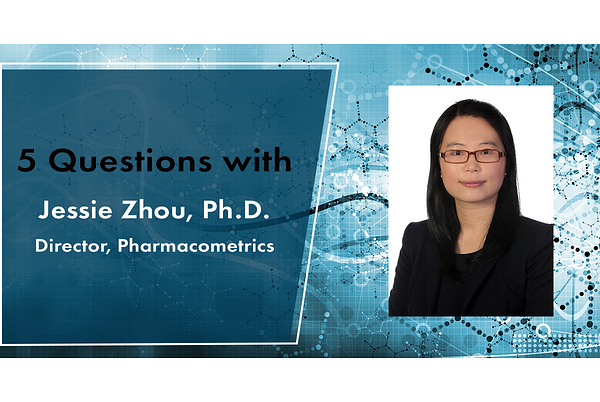